The power device used in phase angle controllers is a thyristor – mostly triacs or SCRs. (There are methods of phase controlling employing high frequency switching using a MOSFET or IGBT, but here I’ll talk about phase angle control with thyristors only). The power flow to the load is controlled by delaying the firing angle (firing time each half-cycle) to the power device.

So, to sum it up, we adjust the voltage or power delivered to the load by delaying the trigger signal to the triac. One thing to remember is that, the delivered voltage and power are not linearly related to the firing phase angle.

To clarify why power and voltage are not linearly related, let’s examine the formula relating the two.

Now let’s now go on to the design part – how we’re actually going to do this.
For the microcontroller, I’ve chosen the extremely popular ATmega8. However, since this application requires only a few pins, you can easily use any other small microcontroller for this purpose, such as ATtiny13.

The zero-crossing is done using the bridge-optocoupler method as I had previously shown. For details regarding the zero-crossing, please go through the article:
Zero crossing detection with PIC16F877A:  http://tahmidmc.blogspot.com/2012/10/zero-crossing-detection-with-pic16f877a.html

So, the DIP-switch can alter the values of PORTB0, PORTB1 and PORTB2. I made all of PORTB input pins and enabled the pull-ups. So, by default, all PORTB pins are high. When one of the switches is ON or shorted, that corresponding pin is low. So, only PORTB0, PORTB1 and PORTB2 can be switched to be high or low. The other pins will be high at all times. So, in order to read the value of the DIP-switch, I first inverted each individual bit of PORTB when reading (PINB) and then added 1 to the value as I wanted one to be the minimum value. Why one the minimum value? If you see the code later, you will see that the register "Count" is used to determine the delay time before the triac is fired. Count will have the value of the DIP-switch state plus one. I wanted a minimum delay before the triac is fired so that there is always a delay after the zero-crossing after the triac is fired. So, the function of the DIP-switch is now quite obvious. The DIP-switch sets the time after the zero-crossing after which the triac is fired. When only PORTB0/PINB0 is low, the delay time before firing the triac is minimum; it is equal to 800µs. When PORTB0/PINB0, PORTB1/PINB1 and PORTB2/PINB2 are all low, the delay time before firing the triac is maximum; it is equal to 800µs * 8 = 6.4ms. The adjusting delay time before firing adjusts the firing angle. How the time is related to the firing angle can be seen at the bottom of this article. The formula and an example are provided.

So, the program is basically as follows:

The rest of the code should be easy to understand and should be self-explanatory – I’ve added comments to help you understand.

Now let’s take a look at my circuit setup and then the different output waveforms using this code: 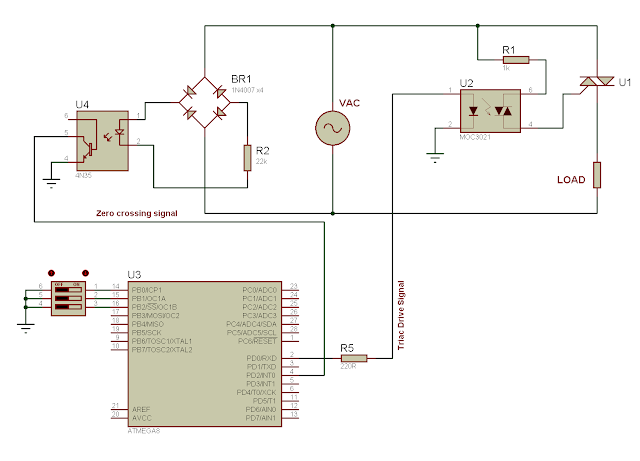 
You should choose R1 depending on the gate current requirements of the triac. It must also have a sufficiently high power dissipation rating. Usually, the instantaneous power may be very high. But since current flows through the resistor for only 250us (1/40 of a 50Hz half cycle), the average power is small enough. Usually, 2W resistors should suffice. 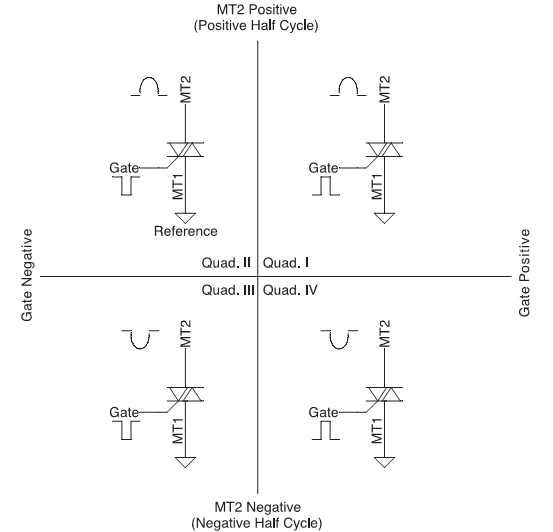 The driver in the circuit is the MOC3021. This is a random phase optically isolated triac output driver. When the LED is turned on, the triac in the MOC3021 turns on and drives the main triac in the circuit. It is a “random phase” driver meaning that it can be driven on at any time during the drive signal, as is required for phase angle control. There are other drivers that only allow drive at the zero-crossing. These cannot be used for phase angle control as phase angle control requires drive after zero-crossing. For guaranteeing that the triac is latched, the LED side of the MOC3021 must be driven with at least 15mA current. The maximum current rating for the LED is 60mA. The peak current rating for the triac is 1A. You should find that we have stayed within these limits in the design. 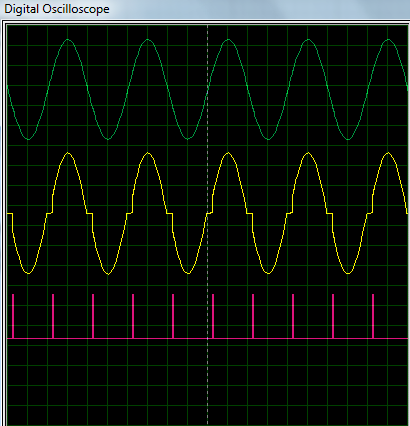 Now I’ll show you a few more waveforms, with other initial delays. 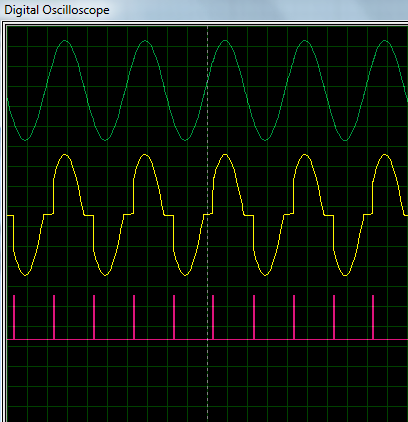 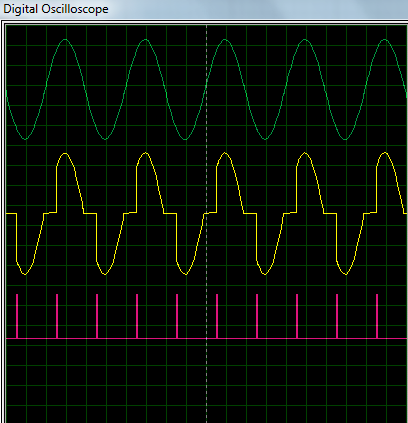 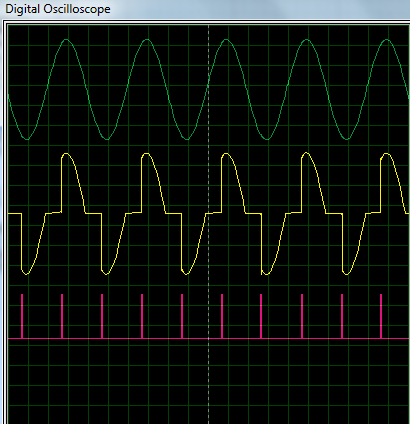 Here, the gate is driven 4ms after the zero-crossing (only PORTB2/PINB2 low : DIP-switch state = 4): 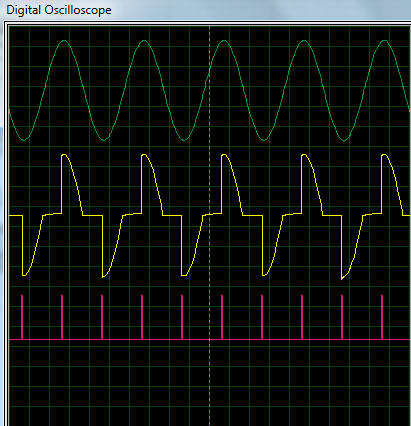 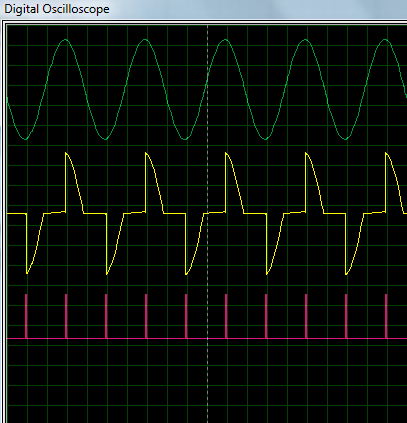 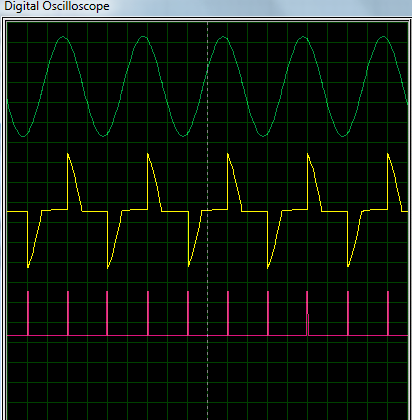 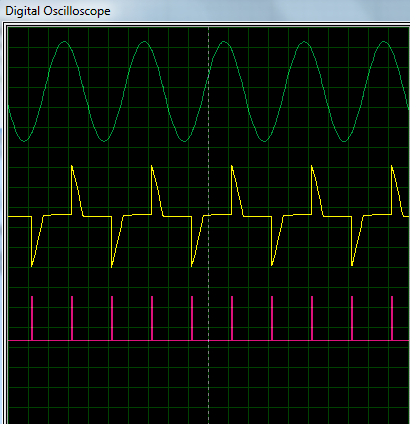 Now, to finish things off, I’ll show you how to find the RMS value of the output voltage.

The RMS output voltage is found from the relationship:

Remember, at the beginning, I mentioned that the voltage output is not linearly correlated with the firing angle? This is what I meant. Here, the delay is 4ms. So, the triac is on for 60% of the cycle. But the output RMS voltage is 183.2V - 83% of the input voltage. The lack of direct proportionality is evident here. The reason behind this is the shape of the AC - sinusoidal.

Now, I give you the task of finding the RMS voltage for the other cases mentioned in this tutorial.

If you want to then find power, you can use the relationship P = V2/R to find the power. The assumption here is that the resistance is constant, as was assumed at the beginning of the tutorial. If the resistance is not constant, power will still vary will resistance, just not directly proportionally.

Reference Book:
One of the best books for understanding the theory behind phase angle control is "POWER ELECTRONICS - CIRCUITS, DEVICES AND APPLICATIONS" by Muhammad H. Rashid. If you want to learn more about thyristors or phase angle control, I recommend reading this book for more info.
Posted by Tahmid at 4:45 AM 19 comments: