In many circuits, it is necessary to use MOSFETs for switching. In many cases, the MOSFET drive signals are generated by microcontrollers. In other cases, they are generated by ICs – PWM controllers, timers or any IC in fact. However, MOSFETs cannot always just be connected to the drive signal and be expected to work properly. Due to the construction of the MOSFET, driving it is not the simplest of tasks, especially for beginners. There are many users who regularly ask for help on MOSFET drive related issues or problems on different blogs, websites and forums. So, here I will show some MOSFET drive techniques/methods for MOSFETs configured as low-side switches.

Before I head on to MOSFET drive, let me just tell you what a low-side switch is, in case you don't know. When the MOSFET (that you're using as a switch) sinks current, it is a low-side switch. The load will be between the drain and +V supply. The source will be connected to ground. Gate will be driven with respect to ground.

Let me start with N-channel Power MOSFETs. One thing to keep in mind is that these MOSFETs are fully turned on when the voltage at the gate with respect to the source (VGS) is > 8V. So while at voltages less than 8V, the MOSFET will be on (as long as VGS > VGS(threshold) ), the MOSFET won’t be fully turned on. It will operate in the linear region and there will be very high losses.

Now let’s go to Logic Level MOSFETs. These MOSFETs tend to have much lower VGS (threshold) and thus are usually fully turned on with VGS of 4V to 5V. One downside to Logic Level MOSFETs is that they usually have higher on-state resistances compared to similarly rated Power MOSFETs. So, this would mean higher conduction losses for the same load.

Another thing to remember is the gate capacitance. So, when the MOSFET is to be turned on or off, the gate must be driven high or low with sufficient current quickly enough so as to charge or discharge the gate capacitance quickly enough so that the MOSFET spends minimal time in the linear region and is quickly turned fully on or off. This is true especially for high speed switching when time period is small. However, in low frequency applications, this may not be a big problem as, even if the MOSFET spends some time in the linear region, it will spend the (remaining) majority time fully on and thus the small amount of time spent in the linear region will not cause much of a problem.

Let’s first consider the simplest situation: a MOSFET is driving a load and is periodically turned on and off to turn the load on and off respectively. How long do I mean by periodically? Well, it really depends on the application. But for this situation, the period between turning on and off may be very long or very short but will be at least half a second. A few examples: 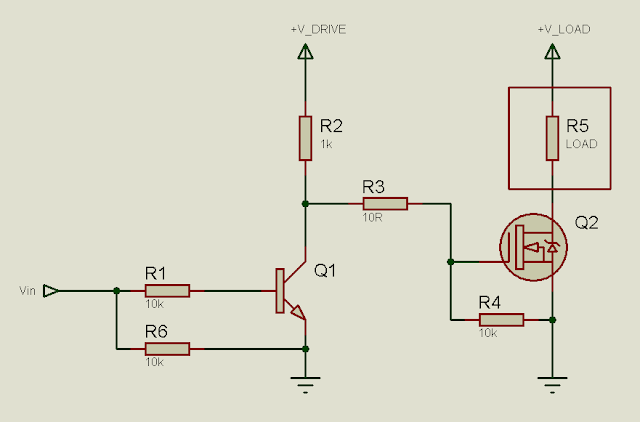 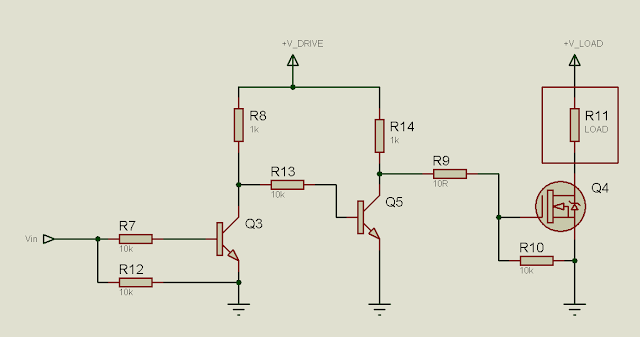 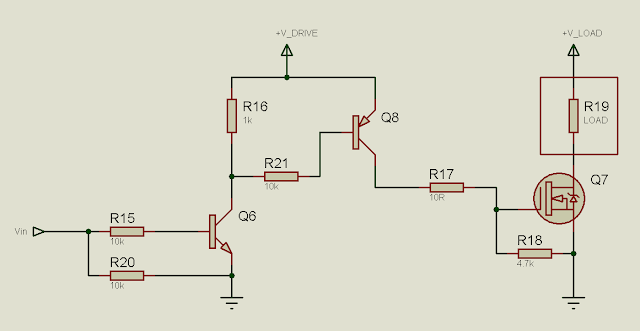 In Fig. 2, the MOSFET turns off almost instantaneously when Vin is zero. This is because when Vin is zero, Q3 is off and Q5 is on. Q5 pulls the gate low, discharging the gate capacitance. However, the MOSFET turn-on is not instantaneous. When Vin is high, Q3 is on and Q5 is off. So, current flows through R14 and charges the MOSFET gate. Here turn-on time is dictated by R14. However, when I say long turn-on time, I am talking in the order of tens or hundreds of microseconds to milliseconds at max. Thus this circuit can easily be used in any of the situations depicted in the four examples above or any similar situation. This driver cannot be used when switching is done in the order of microseconds where both turn-on and turn-off must be very quick – almost instantaneous.

In Fig. 3, the MOSFET turns on almost instantaneously when Vin is one. When Vin is one, Q6 is on and so Q8 is on and thus VGS = +VDRIVE and so the MOSFET turns on. However, when Vin is zero (and so Q6 and Q8 are off), the MOSFET gate discharges through R18. So, gate discharge is slow and turn-off time is dictated by R18. However, this “slow” time is in the same order as mentioned above and so can be used in any of the situations depicted in the four examples above or any similar situation. Similarly, this driver cannot be used when switching is done in the order of microseconds where both turn-on and turn-off must be very quick – almost instantaneous.

In Fig. 4, both turn-on and turn-off are very quick. This driver can be used for higher frequencies than can the other three.

Each of the above four circuits requires only a minimum voltage of 0.7V to fully turn on the MOSFET (+V_DRIVE must be selected properly). Each of the above circuits can also be used to drive either Logic Level MOSFETs or Power MOSFETs.

Here are a few more circuits that I’ll discuss below. 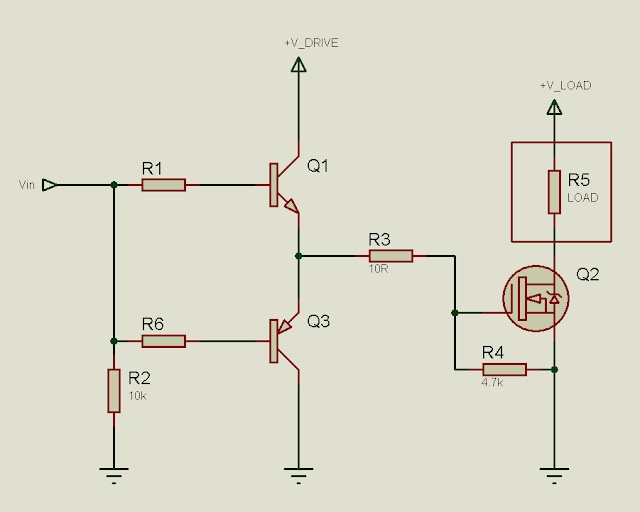 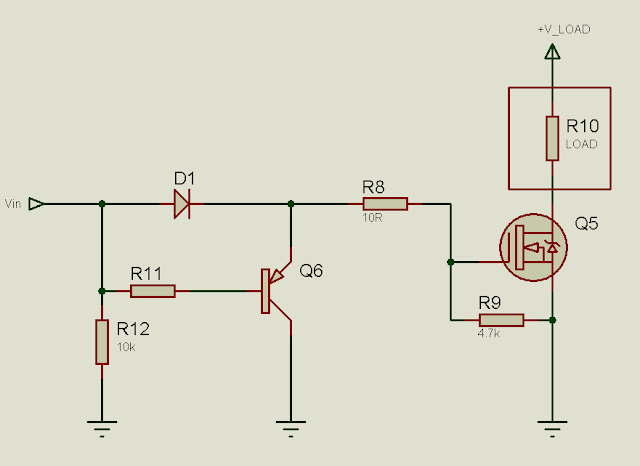 That is the disadvantage to these circuits – that the MOSFET VGS will depend on the magnitude of Vin. However, there are situations where these disadvantages do not matter.

The driver in Fig. 6 can be used when the control chip can only source current but cannot sink current. One example is the SG3524 PWM controller configured to source current. The 0.7V drop is not a problem since the outputs of the SG3524, when high, go up to near the supply voltage. So, even after the 0.7V drop, the voltage is sufficient to fully turn the MOSFET on.

The driver in Fig. 5 is commonly used to drive a MOSFET from a PWM controller. Usually the outputs of PWM controllers go all the way up to the supply voltage (usually 12V, 15V, etc). So, this driver can easily be used, because even after the 0.7V drop, the voltage is high enough to fully turn on a MOSFET. The transistors can also supply high currents. This type of driver based on such a combination of transistors is called a totem-pole driver.

One thing that must be considered in high frequency applications is the MOSFET drive current. When frequency is high, time period is low. So, the MOSFET must be turned on and off in a short time to avoid high losses. The turn-on and turn-off times must be as short as possible to ensure that the MOSFET will be in the linear region for minimum time.

Thus it is natural that to minimize gate charge time, current must be maximized. So, the quicker the gate must be charged or discharged, the higher the charge or discharge current should be. The drivers in Fig.  4, Fig. 5 and Fig. 6 can be used for high-frequency MOSFET drive.

I’ve covered some discrete drivers here based on transistors. However, I always recommend using dedicated driver chips for driving Power MOSFETs in high-frequency applications. Low-side drivers are easily available at low prices. One widely available low-cost low-side driver (that I often use) is the TC427.

The circuit using a TC427 is very easy. The supply voltage has to be provided to the supply pins. Then, all you need to do is provide the input signal and just drive the MOSFET from the TC427 output. The TC427 has 2 drivers. So you can use the TC427 to drive 2 MOSFETs from 2 different input signals. Here is the circuit diagram: 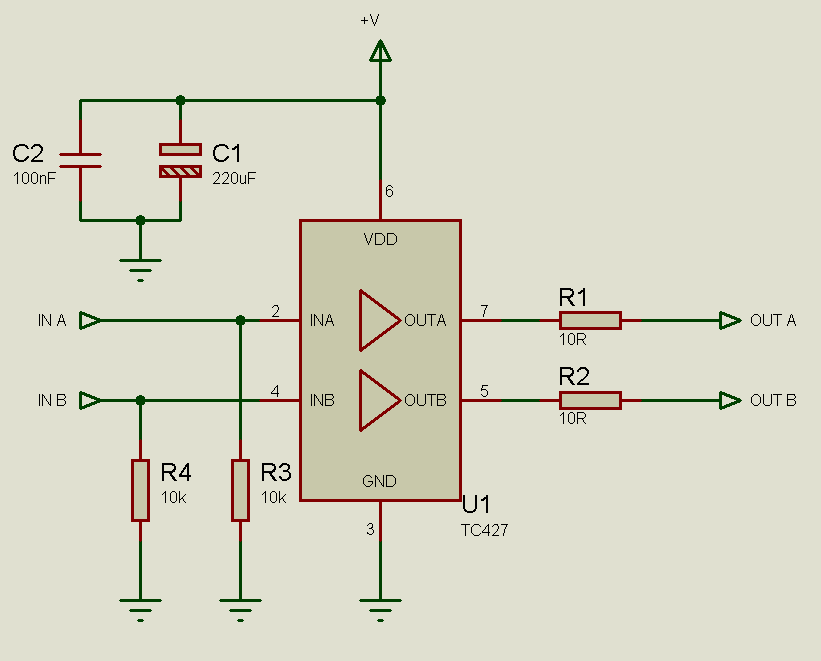 There are numerous ways to drive a MOSFET in a non-isolated low-side configuration. I’ve shown a few circuits using transistors and one using a dedicated driver.

You can find loads of driver chips and the datasheets should show the circuit diagrams. Here I have only covered low-side non-isolated drive. I shall soon make another tutorial where I cover high-side drive and isolated drive.

I hope that this tutorial has helped you. Let me know your comments and feedback.
Posted by Tahmid at 3:30 PM