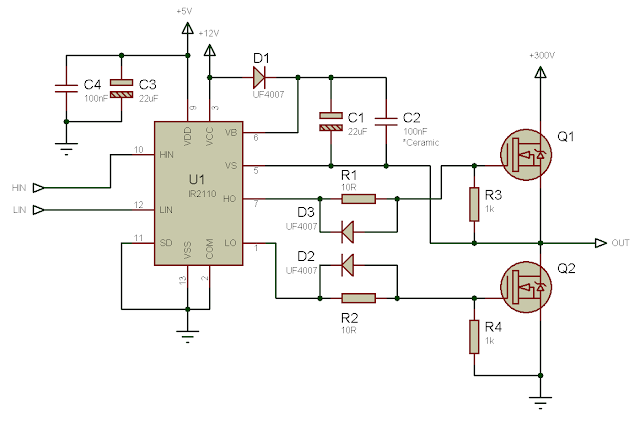 
Whenever I get a message or an email or a comment regarding unsuccessful bridge circuits, it’s usually along the lines of no output being observed, the MOSFETs getting hot, or everything just getting damaged or blowing up. When I was in the preliminary stages of bridge design, I also had repeated failures. I had circuits blowing up. I had circuits just not working, no matter what. I’ve written on my blog about one such experience of mine. You can read it here:

Another thing I should mention is that, in almost all cases of people asking for help, the bridge driver (the high-low side driver) has been the IR2110 (or similar, such as IR2112, IR2113, etc). Remember that most bootstrap-based high-low side drivers function in pretty much the same way. So, I’ll talk about the driver in general here. I had, however, written a tutorial regarding the IR2110. So, if you're interested regarding that check out:

The first thing to do is to check everything over and over again. I know it's cliched and it's probably the most repeated thing you’ve heard, but it's also the least appreciated or followed. One missing connection (or an extra one too, eg a short) could be the cause of all the mayhem.

1) Firstly, check the connection of the bridge itself. Ensure that all the MOSFETs are connected correctly.

2) Check the power connections to the drivers. Make sure that the supply voltage is within acceptable bounds. Ensure that you have small decoupling/bypass capacitors (0.1µF ceramic capacitors) along with larger filter capacitors (for example, 10µF electrolytic capacitors). Use the 0.1µF capacitors across all power lines.

3) Check the connections to the drivers, ie the driving signals coming from the PWM controller, microcontroller, etc. Make sure that the signals for the high-side MOSFET and the low-side MOSFET of one leg of the bridge don’t overlap. If, in any way, both the high-side and low-side MOSFET turn on simultaneously, this will be a dead short-circuit. Expect some ka-boom and smoke. Use an oscilloscope to ensure that the signals don’t overlap.

4) Check the bootstrap circuitry. Make sure you’re using the proper diodes – ultrafast diodes when required. Make sure your bootstrap capacitor is large enough, but not too large. As I had previously mentioned, there is a simple guideline I follow. For low frequencies and high on-times, use large capacitors. 47µF to 68µF could be used for 50Hz/60Hz, for example. For higher frequencies, eg 30kHz, use smaller capacitances, eg 10µF.

Read here about one of my experiences where I damaged loads of drivers and MOSFETs all due to the lack of gate-to-source resistors:

If you have a faulty bridge design and are making changes to it, replacing some components to try again, I suggest you get rid of everything and construct the circuit again using no parts from the old circuit. A faulty MOSFET can damage the driver and vice versa. A faulty driver may damage other parts and so there may be other damaged parts on your circuit that you don’t even know are damaged.